Diet Requirements: McCosker’s flasher wrasses are carnivores, actively hunting tiny crustaceans (e.g., copepods) throughout the day. A diet consisting of various meaty preparations such as brine shrimp, mysis shrimp, and other mixed frozen foods that contain algae, such as spirulina, will maintain optimal health and coloration. We highly encourage soaking frozen foods in vitamin and fatty acid supplements, as flasher wrasses have very high metabolisms. Multiple, small feedings per day rather than one large feeding can also help and in turn create more of a natural environment for a McCosker’s flasher wrasse as it would feed in the wild. McCosker’s flasher wrasses may also accept high quality flake or pellet foods, which is great for nutritional gaps and variety.

Care Requirements: An established, minimum 30 gallon aquarium is required for a single McCosker’s flasher wrasse. However, a 55 gallon aquarium is preferred and an even larger tank is recommended for a group. A tight fitting lid is a must because these wrasses are known to jump out of aquariums. McCosker’s flasher wrasses enjoy a variety of rock work and crevices to swim through and around while they hunt. Such live rock arrangements can also help to make it feel secure and encourage more outgoing behavior. The McCosker’s flasher wrasse is not tolerable of nitrite or ammonia spikes, and an established tank also offers microinvertebrates and crustaceans that naturally accumulate over time as the aquarium ages for it to prey on. Given their peaceful and timid nature, a McCosker’s flasher wrasse can be easily bullied and therefore should not be kept with overly aggressive species, especially those that can outcompete it in food resources. It is best to add a single, or group, of McCosker’s flasher wrasses before larger or more active fish in order to allow them to acclimate to the environment and begin feeding. If you’re interested in a group, add all individuals simultaneously for the best success, or females altogether first before adding a male. Recommended water conditions, 72-78° F, KH 8-12, pH 8.1-8.4, salinity 1.020-1.025. 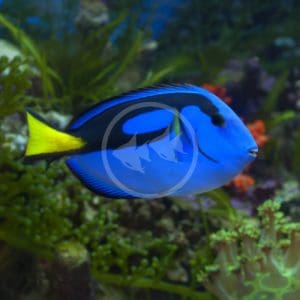